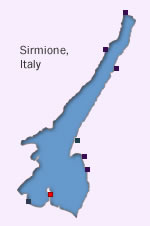 Getting to Sirmione - Travel Information

Sirmione has one of the best locations of all the Lake Garda resorts when it comes to accessibility: not far from the motorway running east to west across northern Italy (and near the junction with the north-south route at Verona) and, of course, within easy reach of a variety of airports.

Those heading to Sirmione from the south and east will do best to get onto the A4/E70 motorway which stretches between Milan and Venice. The Sirmione exit is situated to the east of the turn-offs for Verona - the route then follows main country roads for the few kilometres to the town.

Drivers coming from the north have the option of taking the scenic route to the north of Lake Garda and then the long tour down the lakeshore on the east or west (definitely not recommended in anything approaching busy periods or for those without time on their hands).

Alternatively, they can stay on the motorway as long as possible - taking the A22/E45 from the Austrian border down to the junction with the A4 and then following the directions above.

Most drivers will exit the A22 motorway, however, at Affi (also the exit for Garda and Bardolino) and then use the Peschiera Superstrada express road to the outskirts of Peschiera and then using the southern lakeshore route to approach Sirmione.

Hiring a car for your vacation in Sirmione?
Lowest price guarantee from major car rental suppliers with no hidden costs. Rent from the airport or in resort.
Compare Prices

Plot your route by entering your European starting point in the box above the map and clicking "Get Directions":

Enter your location in Europe:

Sirmione has plenty of choice when it comes to airports, many of which - especially the most close at hand - are served with flights from the low-cost airlines from the UK or with travel company charter flights. The largest and most likely to have convenient scheduled flights from further afield are Venice (Marco Polo) Airport and the two airports at Milan.

The nearest railway stations to Sirmione are at Peschiera (www.peschieraitaly.com) - 11km - or at Desenzano (www.desenzanogarda.com) - 10km. From either train station, local buses or a short taxi ride are necessary to get to Sirmione.

Looking for some of the best-rated accommodation in Sirmione?
Check hotels, guesthouses and apartments rated 'superb' or 'exceptional' by visitors like you who used booking reservation website Booking.com. No reservation fees.
Check availability